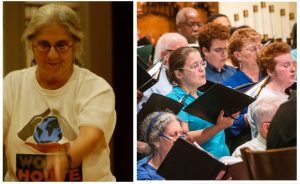 If you are committed to peace and justice issues and would like to unite with a supportive group of people to express these ideas in song, consider joining the World House Choir.

The only requirements are the ability to match pitch and a commitment to attending rehearsals and performances. We meet weekly on Monday evenings from 7:00-8:30 pm at the Foundry Theater 920 Corry St. on the campus of Antioch College where we rehearse for several public performances throughout the year.

The choir is currently preparing several local area performances including:

If you’re interested in joining the choir, please come a little early [at 6:30pm] to our next open rehearsal on Monday, February 3  for a short orientation and voice placement. All voices are welcome, we are especially interested in adding basses and tenors. We also offer free childcare during rehearsals to attract young families. Join us.