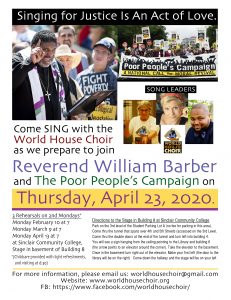 Singing for justice is an act of love. Singers from though out the Miami Valley are invited to join the World House Choir for a special performance in Dayton on Thursday, April 23, to accompany Rev. William Barber and his Poor People’s Campaign.

Dayton is the only Ohio stop on Barber’s 32-state caravan that will conclude with a mass demonstration in Washington D.C. on June 20. The campaign is endeavoring to awaken Americans to the very real issues of poverty and is fashioned after Dr. Martin Luther King’s poor peoples campaign from the 1960’s.

Three rehearsals will be held at Sinclair Community College prior to the event. The rehearsal dates are:

Rehearsal location is on the stage in the basement of Building 8. Click here to download detailed directions to rehearsal space.

Childcare will be provided starting at 6:30, with light snacks. Join us! E-mail worldhousechoir@gmail.com for further information.