With the arrival of deep winter comes our national celebration of Dr. Martin Luther King Jr. and the ideals he fought and died for. 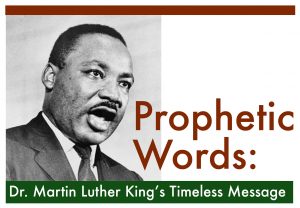 When I think of where our country stands now in January 2017, I wonder how many of our fifty state legislatures would again vote to make King’s birthday a holiday. This is why is it imperative to understand these newly perilous times and engage with each other on this meaningful day.

We need to listen to King’s words and witness the non-violent actions by empowered citizen foot soldiers of the Civil Rights Movement who sought to provoke responses to their struggle for voting rights, for human rights, for justice, dignity and respect. The lessons in King’s prophetic deeds and creeds are many. In 1963, King wrote the following words in Letter from Birmingham Jail:

Injustice anywhere is a threat to justice everywhere. We are caught in an inescapable network of mutuality, tied in a single garment of destiny. Whatever affects one directly, affects all indirectly. Never again can we afford to live with the narrow, provincial “outside agitator” idea. Anyone who lives in the United States can never be considered an outsider anywhere within its bounds.

Much has changed in the decades since Dr. King’s death, although it seems at times that too much has stayed the same…. And those today who take up the challenge of overcoming hatred with love are responding, as Dr. Martin Luther King Jr. did, to the clarion call of the old spiritual that said, “Hold Out Your Light you Heaven Bound Soldier… Let your light shine around the world.”

World House Choir singers will take His Light Still Shines as well as other relevant repertoire to perform in two Ohio prisons….on January 15th to Marion Correctional in concert with KUJI Men’s Chorus, and on January 23rd to London Correctional in concert with UBUNTU Men’s Chorus. Congregational singing by performers and audiences alike will sing verses from “This Little Light of Mine”