In early 2016 I was visiting my long-time friend and colleague the composer, arranger and conductor, Steve Milloy. Steve mentioned to 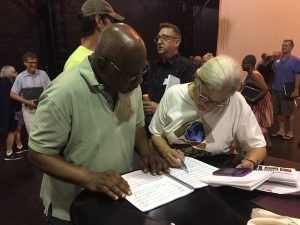 Steve Milloy & I go over the score at a recent World House Choir rehearsal.

me that he’d been commissioned by a group of five LGBTQ choirs to write a major work about Bayard Rustin — a gay, African-American, Quaker, civil rights activist.

Little is known about Rustin who not only mentored Martin Luther King, Jr. but also pioneered the use of non-violent civil disobedience in the American Civil Rights Movement.

As I sat in Steve’s living room in Cincinnati and listened to a draft of the first movement, I was immediately intrigued. I knew I wanted to perform this work as soon as I could get the forces together.

Now I’m excited and full of curiosity as I read and learn more about Bayard Rustin. When the World House Choir rehearses Steve Milloy’s powerful narrated song cycle, Bayard Rustin, The Man Behind the Dream, I am buoyed and inspired to act, to connect, to change the current narrative.

Though Rustin was born in 1912 and died in 1987, he is a man for these times, a model in every way for today’s activism. We so need Milloy’s rousing work of justice art right now.

Bayard said, “Our power is in our ability to make things unworkable. The only weapon we have is our bodies; and we have to tuck them in places so wheels don’t turn.”

In the piece, there is a movement we sing called “Stick in the Wheel” to help us learn how to “shut it all down.”

Another one of Rustin’s many wise, quotable, phrases is prophetic for today, “We are all one, if we don’t know it, we will learn it the hard way.”

“March On,” the last movement, used some of those lyrics:

We are all one.

If we don’t know that today we will learn the lesson the hard, hard way

What will it take to move you to march?

March on, step by step together, march on advancing every day,

It’s a movement not a moment, one human family,

When all people stand together, we will know equality.

What excites me about breathing life into this work?

I am intrigued by how much this music brings Bayard Rustin’s life into focus and creates a blueprint for action today. The musicians gathered look like the world Bayard wanted to see. The 100-voice World House Choir will join singers from a variety of choirs and organizations in the  Cincinnati tri-state area in four performances of Bayard Rustin: The Man Behind the Dream.

Together let’s act to dismantle injustice. Let’s be a stick in the wheel.

Please join us for one of the four performances of Bayard Rustin: The Man Behind the Dream. Admission is free [donations welcome].