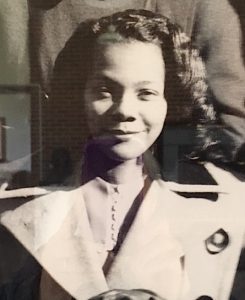 Miss Coretta Scott in her Freshman year at Antioch College, 1945

When I think about our programs honoring Coretta Scott King over the last four years, this commemoration especially reverberates for me because of Coretta’s words in a letter that recently came to light during Senate hearings around with the nomination of Jeff Sessions to be Attorney General of the United States.

In 1986, Coretta Scott King urged Congress to block the nomination of Sessions for a federal judgeship in Alabama. Coretta’s courage and truth telling hits me hard at this moment because we are now beholding the accuracy and veracity of her words in that letter. The actions and verbal insults of Jeff Sessions, now our Attorney General, seem to confirm all of Coretta’s perceptions written 30 years ago. This is only the most recent reminder of the stature and resonance of the woman whom we honor at Antioch College this Tuesday evening, April 25th.

Toward the end of her letter to members of congress Coretta Scott wrote, “A review of Mr. Sessions’ conduct raises serious questions about his commitment to the protection of the voting rights of all American citizens and consequently his fair and unbiased judgment regarding this fundamental right.”

At the end, she concludes with, “I do not believe Jefferson Sessions possesses the requisite judgment, competence and sensitivity 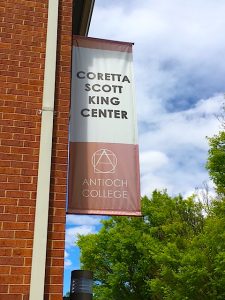 to the rights guaranteed by the federal civil rights laws to qualify for the appointment to the federal district court. Based on his record, I believe his confirmation would have a devastating effect on not only the judicial system in Alabama, but also on the progress we have made everywhere toward fulfilling my husband’s dream that he envisioned over twenty years ago.”

In this program dedicated to Coretta Scott King, the World House Choir sings every song with Coretta in mind. We are thinking about her tenacity, her keen perceptiveness, her experience, and her reasoned argument as to why a man like Jeff Sessions should not be Attorney General.  Experience matters, history matters and our inclusive history matters. The life of Coretta Scott King matters. Her exemplary expression teaches us this these 30 years later. We are honored to be part of this birthday celebration (April 27, 1927—January 30, 2016).