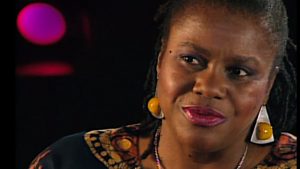 I will never forget the moment in my life over 25 years ago when I heard Dr. Bernice Johnson Reagon introduce the spiritual Wade in the Water. I knew she was speaking both literally and metaphorically. The power and truth in her words have had a lifelong effect on me:

Originally, Wade in the Water was a code song for enslaved African Americans who were attempting to escape.  It  cautioned then to travel by water on their journey to freedom because they could not be tracked once they entered water. Also, rivers often marked the boundaries between slave states and free states.

The chorus of Wade in the Water, “God’s gon trouble the water,” indicated the means of the journey and encouraged the escapees to remember that just as God troubled the water to save the Israelites, he would do the same for them. The mention of Moses in the song refers to Harriet Tubman, the greatest single conductor of the Underground Railroad. Having escaped slavery herself, Tubman earned the name Moses for leading more than 300 enslaved people to freedom including her own parents.

I continue to love this spiritual because it speaks to me on many levels. I wanted it to be the centerpiece of a choral program around the significance and myriad meanings of water.

I decided to pair Wade in the Water with Yemaya, a traditional sacred chant from the Santeria religion of Cuba, an adaptation of the Yoruba religion of West Africa. The arranger of this work wrote:

Yemaya is one of many masculine and feminine Orishas, or deities, each of whom personifies a different aspect of nature and humanity—similar to the pantheon of Catholic saints. Yemaya is a feminine Orisha who represents the maternal forces of creation and life itself. Her home is the ocean, and she is considered to be the mother of many other oceans. I have tried to use overlapping voices and rhythms to suggest the hypnotic movement of the waves and the tides.

As I considered the feminine aspects of Yemaya, her fertility, her ocean home, and the expansive and symbolic meaning of the slave poet’s wading in the water, I thought of other choral works to include in the program. In Down by the Riverside the slave poet suggests a solution to our warring ways, “I ain’t gonna study war no more” and where else to consider this possibility but down by the riverside. Isn’t that where we often go when we need to make decisions? We are drawn to the healing waters of a nearby river or ocean.

I remembered the literary genius and beauty of Langston Hughes’ poem The Negro Speaks of Rivers so poignantly set to music by Margaret Bonds. This poem, one of Hughes’ first published works, captures the cultural legacy of the Mississippi River. A river seared into our consciousness by its power and beauty.

Even before the last season of the World House Choir ended, ideas were percolating in me about the year ahead. I thought it was time for the World House Choir to perform Paul Winter’s earth mass, Missa Gaia again. When I discovered that Earth Day, April 22, fell on our rehearsal day, Monday, I started to craft a concert as a leadup to our performance of Missa Gaia this September. Watch this space for more news about this upcoming concert to be performed in Yellow Springs, Urbana and in Dayton at the new Levitt Pavilion.

The choral works on our program for Earth Day [April 22] will be stitched together by the talented storyteller Omope Carter Daboiku. And, all the while, the idea to include some kind of drumming was working on me. The drum represents the heartbeat of all living things on the planet. Nigerian drummer Baoku Moses will be our guest accompanying two works on the program. The World House Choir will also perform his original work Wa Ka Lo, Let’s Celebrate. Drummer Baba Charles Miller will also join forces with the World House Choir.

As we gather together in community on Earth Day, we will celebrate our life giving planet, knowing that to make the changes we need to make, for her, the life giving source of water and soil, we need to wade in the water, take risks for others, hear the voices and sounds of the ailing waters and act together for climate justice.